Strona głównaUczelnia (Kalendarium)Journey to the West: The Filipino Ilustrados in Search of the Nation amidst the Ruins of Empire

Journey to the West: The Filipino Ilustrados in Search of the Nation amidst the Ruins of Empire

„Journey to the West: The Filipino Ilustrados in Search of the Nation amidst the Ruins of Empire”,

The Filipino ilustrados – activist intellectuals, artists and authors living in the Spain of the 1880s and 1890s – fought to gain representation in the Spanish legislature for the Philippines and equality of citizenship for Filipinos and Spaniards.  Spain had lost all its overseas colonies but for Cuba, Puerto Rico and the Philippines – islands to which Spain held on tightly in the decades prior to the “debacle” of 1898.  Not calling outright for independence, the ilustrado reformists thus sought recognition and assimilation by an empire in its waning years.  In their critique of the abuses of power by the colonial administration and the despotic religious orders in the Philippines, they gave notice of the imminence of violent insurrection should reforms be denied.  In the process, this visionary cadre of Hispanic Asians built a virtual bridge between the continents and laid the foundations for the creation of a future Philippine republic.  For it was in making their “journey to the west” that the Filipino ilustrados received and reconceived a language of liberation that they would bring home “to the east.”

The conference is part of Dialogs in Transition: Luso-Hispanic Cultural Production and Global South Exchanges, 9-12/05/2019, Poland (https://lasaweb.org/uploads/uc_ewccr-05122019.pdf) and will be delivered by Eugenio Matibag, Professor of Spanish in the Department of World Languages and Cultures at Iowa State University, was born in Cavite, Philippines, and grew up in Southern California.  His two books are Afro-Cuban Religious Experience (University Press of Florida, 1996) and Haitian-Dominican Counterpoint (Palgrave, 2003).  He has published essays on Hispanic Philippine literature and culture in Revista Hispánica Moderna, Humanities Diliman, Kritika Kultura, New Orleans and the Global South, Migrant Identities of «Creole Cosmopolitans», Revista de Crítica Literaria Latinoamericana, and Perspectives in the Arts and Humanities Asia.  He is currently at work on a monograph that examines the discourse of nationalism and the production of knowledge in nineteenth and twentieth-century Philippines. 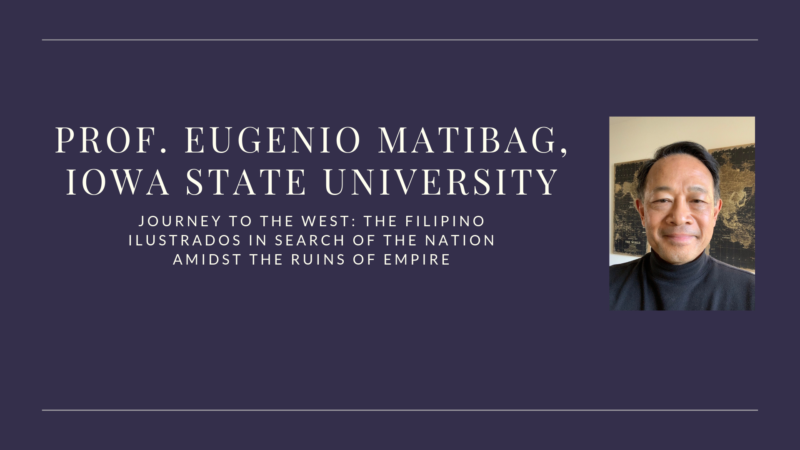